Visit from Siegerland to Barnet 2019 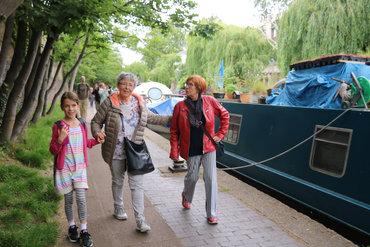 Along the canal to Regents Park 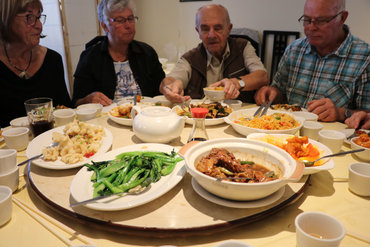 Our visitors arrived safely at St Pancras Station to be greeted by their host families. It was a long day of travel from Germany – a car journey into Siegen and then three trains to arrive finally in London. Not the end of the journey, of course: a tube ride followed to get all our visitors home with hosts.

The next day the sun shone and in two groups we ‘rendez-voused’ at the Espresso Bar in Regents Park. One group walked from Camden Town Station, setting out along the canal, and the other travelled by bus to a point closer to the destination. We then all set off together to explore the park, especially Queen Mary’s Garden with the roses in full glory both in colour and in scent. A sight to behold. From there we headed off to Chinatown, a short tube ride away. Here we enjoyed a spectacular buffet for more than 30 of us. A meal to remember! Irene then led a short walk through Soho looking at some historical and more recent points of interest. This was followed by a well-needed, thirst-quenching stop at a pub before heading home.

Mural of Soho Life and
Characters in Carnaby Street

A refreshment stop near Soho Square

As usual at the weekend, everyone chose their own activities and then on the Monday we all went by hired coach to Cambridge. The first stop was punting – a slow drift in the sunshine past many buildings of note, lulled by the gentle punting and the restful flow of history before us. The colleges themselves were closed to visitors because of the exam season, but we visited Kings College Chapel, probably the best-known and certainly one of the most iconic buildings in Cambridge. It did not disappoint.

On our last full day we went to the London Canal Museum where one of the volunteers introduced us to the story of Carlo Gatti, who was responsible for the building that now houses the museum. He was the first in the world to bring ice cream to the masses, importing huge blocks of ice brought by sailing ship from Norway to put into the ice pits under the building. He then made and delivered ice cream by horse and cart all around London. He had arrived penniless and ended up a millionaire.

Some rain in the afternoon dampened things to an extent at the Kings Cross Regeneration Area, but luckily there were lots of eating and drinking possibilities. Sadly, the one thousand plus fountains in Granary Square were switched off, but the Skip Garden was delightful and the renovated former industrial buildings were interesting, especially the ‘slice of pizza-shaped’ flats within the old gasometer structures.

... and more punting in Cambridge

The Skip Garden at the
Kings Cross Regeneration Area

The inside of Kings College Chapel

At Fresh Fry, our favourite
fish and chip restaurant

Outside the London Canal Museum

Inside the canal museum

Two extras this time were a Bring-a-Dish at Harry and Lorely’s house on the Sunday evening and a trip to Barnet Museum on Wednesday morning for those who were able to fit it in. They received leaflets with pictures of the 70 banners belonging to families who fought in the Battle of Barnet of 1471. These banners are currently on lamp posts all along the High Street.

The visit was rounded off by the ever-popular fish and chips at Fresh Fry, always much enjoyed. So goodbye for now until we meet again next year.

Friends of Siegerland Scroll Up